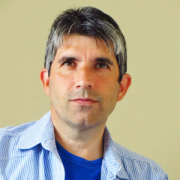 Rev Andrew Bents began his pastorate at Horsell Evangelical Church in October 2013. Andy has lived in Surrey since 1997, having moved from South Wales to marry his wife Anita. Andy & Anita have two children, Rachel & Ethan.

Andy enjoys Welsh Rugby and is a bit of a techie having spent a number of years working in IT. He graduated from Kingston University with a BSc. Hons. in ‘Computer Information Systems Design’ and spent 13 years working in IT as a developer, consultant and lastly as an IT Manager, before entering Christian Ministry.

Paul is married to Liz who is part of the music group. They have 3 grown up children and 3 grandchildren.

Paul has lived in Woking most of his life, he became a Christian during his student days at a church in London. He is a mechanical engineer working in the design and development field.

He has an interest in understanding what the Bible says about origins and the attacks on it from atheistic secularist views that are very popular with so many. Paul and Liz are part of the leadership of the outreach to children held on Friday evenings.